SUPREME UNBEING is a mysterious 5-piece metal band led by vocalist/prophet Zac Red, with his fellow prophets D.Vine (Lead Guitar), D.Sciple (Rhythm Guitar), Unknown (Bass) and Al Mytee (Drums). Although the band just recently transformed from animated characters into real flesh and blood entities, their impact has been felt in the physical domain since the release (October 2020) of their debut full-length album Enter Reality which garnered an 8/10 rating in Metal Hammer (Greece) and a 3rd place in “Album of the Year 2020” according to the readers of Sweden Rock Magazine, amongst other noteworthy accomplishments such as landing Spotify Editorial Playlist placements on Thrashers and New Metal Tracks, and combining a staggering +5.5 million digital and video streams in less than 12 months since the debut.

Letting nature take its course, Supreme Unbeing, on November 26th 2021, released their new haunting and high-octane single – Hide The Beast – from their upcoming, second, full-length album Enduring Physicality (to be released 5.5.22). Hide The Beast will get your blood pumping as it offers dual perspectives of the brutality, and anxiety, of our raw nature – the one of the beast, and the one of the victim – but which is really which? Being the first Supreme Unbeing song with a feature, Hide The Beast features a guest appearance from ELEINE vocalist Madeleine Liljestam.

“We all have a beast inside of us which we are trying, oh, so hard to tame, but in the end we cannot – as the song goes – hide the beast. We can only find inner peace, and build a solid relationship with ourselves, when we understand, and trust, our inner beast in the same way that we understand, and trust, the person that others believe that they see when they see you.” Says Zac Red

Continuing the success of the previous, daunting and ominous-sounding, single Face Of Evil, which already amassed +600.000 views on Youtube in less than one month, Supreme Unbeing, with Hide The Beast will force you, yet again, to take a deep look inside of yourself after studying the lyrics to the song. With Swedish actor Dragomir Mrsic (known from “Snabba Cash”, and “Edge Of Tomorrow” where he co-starred along Tom Cruise) also continuing his portrayal of yet another character, in the music video for Hide The Beast, only the fearless will dare to follow where this “mini-series” will lead.

“I’ve played many parts, and characters, both in life and on TV. I’ve “killed” the most people throughout Swedish TV-history, allowing me to use my inner beast to portray all those parts. This time, I’m not sure who’s actually the real beast.” Says Dragomir Mrsic

“You cannot hide or run away from nature.” concludes Zac Red of Supreme Unbeing. 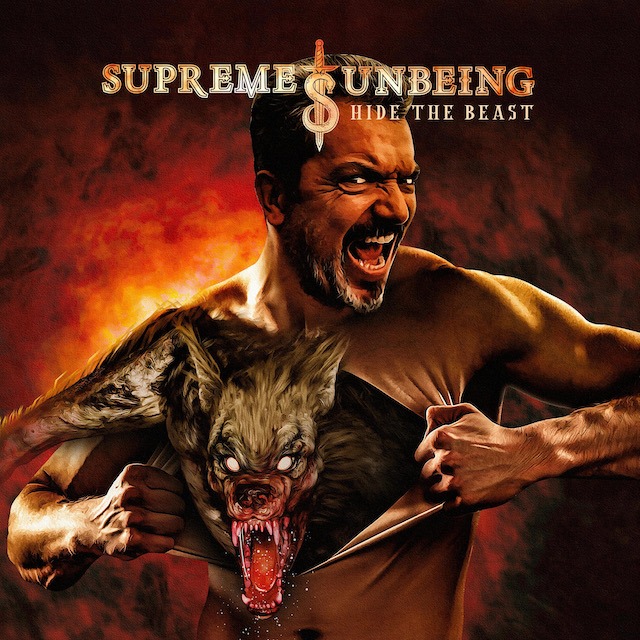